Hi ! I'm Tiphaine Marfil, 25 years old and passionnante about traveling. I created Six Reasons Why to share with you my passion, exchange and meet other addicts. To know more about me,click on "About me".
Know more

Vivaaa Las Vegas ! In 2017 I had the chance to visit Las Vegas on a trip organized by my company. To be completely honest, this city was far from appearing in the top of my bucket list. But, once there, I can only admit that the capital of Nevada has some assets to seduce its visitors. Generally speaking, I do not recommend to fly from Europe only to see Las Vegas, but this may be a good alternative for a road trip around Los Angeles or San Francisco. Four days are enough to get to the Sin City. So here are my six reasons to visit Las Vegas.

Las Vegas is the party city and there is not a day of the week without incredible parties and prestigious guests. The city hosts the biggest shows and the greatest artists in the world and the hardest part  is to make a choice. Celine Dion, Britney Spears,  the Cirque du Soleil or Micheal Jackson One show – each hotel has its own show. A great way to start the evening and an alternative to a (expensive) bar hopping. What I appreciate above all is the presence of international DJs who are hard enough to see live where I come from. The famous clubs of Las Vegas, like the Omnia of Caesar’s Palace, the Hakkasan of MGM Grand, the Marquee of Cosmopolitan or the XS of the Wynn welcome the most famous DJs. Steve Aokie, Tiesto, Robin Schulz, Dj Snake, David Guetta, Alesso or Calvin Harris, they are all there and you just have to choose. I went to see Steve Aokie at Hakkasan for $60 and it was an incredible moment !

You cannot go to  Las Vegas without taking a trip to the Grand Canyon. You can either rent a car or book your tour with a tour operator. The Grand Canyon is about a four-hour drive from the Las Vegas Strip. The Grand Canyon is over 5000 km² and the nearest part of Vegas is the West Rim and the famous Sky Walk. Whether you decide to enjoy the Grand Canyon by foot, bus, from the Sky Walk or by helicopter, you will take full eyes. I think this is the first time I have felt so small and lonely facing the nature, even though hundreds of tourists are around. And this peace is much more appreciable after a few days spent in the bustle of Las Vegas.

If you didn’t have the chance to travel a lot, Las Vegas is the perfect place for you. On the Strip, you can go from Egypt at Luxor Hotel to Venice at Venetian Hotel through Italy, New York, Paris or Hollywood. The hotels which have made the reputation of the city recreated perfectly the emblematic monuments of the largest cities in the world. You can enjoy a romantic dinner at the top of the Eiffel Tower, take a gondola ride on the canals of Venice or ride a roller coaster through the skyscrapers of New York.

PS : You can enter and visit all hotels on the Strip for free, which eases your wallet in a city as expensive as Las Vegas.

If, like me, cash gales are not your thing, the program of your days in Las Vegas will remain relatively simple. You just have to find a poolside lounger at your hotel and recover from the night before by sipping a chilled cocktail. And as it is extremely warm outside, it’s a double pleasure. During the day, you can choose to stay in the dark of casinos to try (and i said try) to break the record of the biggest jackpot won by an anonymous, only 40 million dollars, or tan at the pool. Each hotel has one or more pools with bars and restaurants. You don’t even need to lift a finger to order something. So yes, we reach records of laziness, but hey, it’s the holidays !

After a few days in Las Vegas, it’s hard to remember that you’re in the middle of the desert. This is certainly due to the incredible attractions that you can find throughout the city. The amusement park at over 270 meters above sea level at the Stratosphere, shark swim at the Mandalay, helicopter ride over the Strip, Zipline over the city at VooDoo Zipline Rio, there does not seem to be any limits in Las Vegas. Haaa yes, maybe one : money 😉

Since in my world, it’s never all white or all black, there are inevitably some thingd that I did not like in Las Vegas. Here is a small non-exhaustive list.

Hi ! I'm Tiphaine Marfil, 25 years old and passionnante about traveling. I create Six Reasons Why to share with you my passion, exchange and meet other addicts. To know more about me,click on "About me".

The 6 best things to do in Washington D.C.

The Top 6 reasons to visit Miami 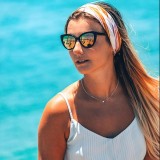 Hi ! I'm Tiphaine Marfil, 25 years old and passionnante about traveling. I create Six Reasons Why to share with you my passion, exchange and meet other addicts. To know more about me,click on "About me".
View Posts